The Most Important Election In US History:

All Hands On Deck!

The future of our country, the lives and livelihoods of millions of Americans and the fate of life on our planet are hanging in the balance. With an incompetent, corrupt and self- serving president being enabled by a complicit GOP and a criminally negligent Department of Justice, none of us can afford to stand on the sidelines.  All of us must find ways to influence the national election while also helping keep New Mexico Blue.

While polls are learning toward promising outcomes for Biden and the US Senate, we all remember 2016 when polls pointed to an almost certain victory for Clinton.  With looming possibilities of foreign intervention, voter suppression and/or acts of desperation by Trump to delegitimize the election,  we must not become complacent.

We need a landslide.  There is no time to lose. Your help is needed to do this now!

TO JOIN US:  Click here to let us know you’re interested and complete a brief survey of your interests.  We’ll get back to you shortly or you can contact Marjorie Luckey: luckbend@gmail.com or 973-902-6091

The Taos United:Tasenos Unidos Election Group has joined forces with SwingLeft.org, Vote Forward, Flippable and other national organizations to reach voters in 12 battleground states to flip 8 Senate seats and win crucial electoral college votes for Biden.  Along the way, we’ll help flip state house seats to end some of the most egregious gerrymandering in the country by fairer post-census redistricting in 2021. 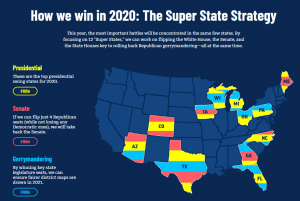 MULTIPLE OPTIONS FOR ACTION, working on your own or with a small group, all from home

Vote Forward pioneered the use of meta data to identify less frequent voters who would likely vote for Democrats IF they vote. This approach was first tested and proven to work in the Alabama special Senate election that Democrat Doug Jones won in 2017. Compared to similar voters who did not receive a letter, the campaign increased turnout by 3.9%. That doesn’t sound like much but in a close race it’s gold.

In the 2020 election, letters will be targeted to the 12 super states in a campaign being completed by multiple progressive and democratic organizations and grassroots groups all over the country. 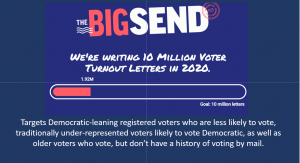 THE PROCESS IS EASY: 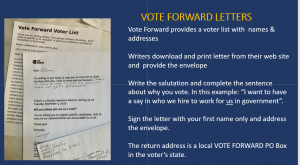 Letter writers download and print letters in batches of 20.

Fold completed letter, put in the envelope, seal and put on a stamp. We fill them out but hold onto all of them to mail in October, date to be determined.

Personalized postcards have also been shown to increase voter turnout.  We are partnering with Postcardstovoters.org to encourage voters to request a vote-by-mail ballot, support specific candidates for state legislatures, US Senate and Biden in November and vote by Nov 3. 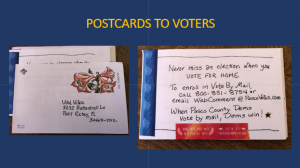 Open Progress will train you well. There are webinars and live support:

Commitment:  1 hour a week or more

TOGETHER WE CAN DO THIS!