Essentials for you and anyone who many need it:

Request an absentee ballot for the June primary

A US Representative is responsible for dealing with national policy issues including Federal budgets and taxes, national defense, health and human services, homeland security, immigration and many others.   A Representative must be able to think about issues on a national scale at the same time as weighing impacts of policies on constituents and businesses in his or her district.

Taos United/Taoseños Unidos, a NM non-profit, conducted this survey to help inform voters. All candidates were asked about 16 issues which are likely to be considered in the US Congress. Mr. Blair and Mr. Serna failed to respond.

All five candidates listed below:

These five candidates differed on the following issues: 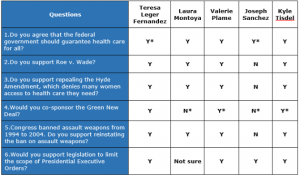 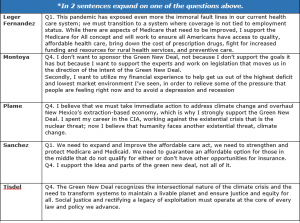 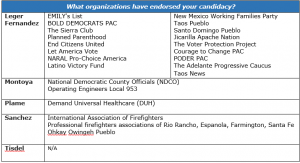 If you’ve ever wondered how to evaluate judicial candidates, here’s an enlightening explanation by retired judge Peggy Nelson that may help you “Judge the Judges”

The Merit in a Merit Selection of Judges:

Historically, a judge was either elected in a partisan election or got the job by political appointment. Both methods embroiled the judiciary in politics and gave “merit selection” little consideration in the choice of a judge.
In 1940 the Missouri Plan became a widespread reform to reduce the pressure of politics on the judiciary. The Plan calls for a politically balanced commission to solicit applications from lawyers who wish to serve. After a robust vetting, the commission presents the governor with a list of qualified candidates from which to choose a new judge. If retained by the voters in a nonpartisan election in the next general election cycle, the newly appointed judge faces a retention election every six years.
Under the Missouri Plan, a judge never has to declare a party and does not have to defend himself or herself against all comers in a partisan primary or a general election. This method of selecting judges puts “merit selection” over political connections.
New Mexico voters adopted a modified Missouri Plan when they amended the state’s constitution in 1988. The New Mexico plan deviated from the Missouri Plan in one significant way. Once appointed, the judge kept the job only if elected in a partisan vote in the next election cycle.
This flaw in our New Mexico plan turns “merit selection” on its head. Any attorney who meets the minimum requirements (35 years old and a lawyer for six years) can declare his or her candidacy for judge without being vetted by a judicial selection commission. And, whoever wins that partisan election is subject to a retention election every six years.
Partisan politics should have no role in the placement of judges on the bench.  Judges should be free from political and community pressure and should follow the rule of law.

The judicial selection commissions and the amendment that created them apply only to District, Appeals and Supreme Court. Melissa Kennelly is the only one vetted by that panel.

Historically, Magistrate Judges have been non-attorneys (a legacy of justices of the peace in small, far flung towns and counties), and in most parts of the state they remain lay people. The Magistrate system is strictly by election. Sara Blankenhorn is only the second attorney to hold that position. Jeff Shannon was the first.

If you missed any of the worthwhile candidate forums presented by the Taos County Democratic Party they are archived here: https://www.taosvotesblue.com/candidates

Tuesday, May 19, 6:30-8:00 pm, Conversation About Gas & Oil Influence in NM Legislature featuring Heather Ferguson, Executive Director, Common Cause NM; Dede Feldman, former NM State Senator and author; and Kathleen Sabo, NM Ethics Watch. Common Cause NM and NM Ethics Watch just published a detailed study of the influence of gas and oil industry contributions and lobbying on the NM State Legislature. It examines patterns in campaign donations, dinners and other perks, as well as the concentration of gas and oil industry lobbyists in NM. It also examines specific legislators and legislation that were significantly influenced by the industry. We will discuss how this influence unfolds and what concerned New Mexicans can do about it. You must pre-register for this zoominar. Click here to register.

Tuesday, May 26, 6:30 – 8:00 pm. Conversation with NM Voices for Children About the NM State Budget Crisis with Amber Wallin, Deputy Director; Bill Jordan, Government Relations Officer; and Paige Knight, Research and Policy Analyst. Joining this panel will be a NM State Legislator to be determined. You must pre-register for this Zoominar. We will be discussing the dire state of the NM state budget due to plummeting gas and oil prices and the economic impact of Covid-19. Click here to register.

Tuesday, June 9, 6:30 – 8pm. Conversation About the Enormous Benefits of Forming a NM State Public Bank with Public Banking Advocate Leadership & Experts. On our panel will be Elaine Sullivan, Board President of New Mexico’s Alliance for Local Economic Prosperity and other experts from NM and the nation. The composition of experts to participate in this panel discussion is still be finalized, but you will want to put this in your calendar as, especially with the state experiencing a critical budget crisis, every strategy for maximizing our financial resources is critical and public banking has immense potential for supporting the state financial capacity and advancing economic justice.

PAST WEBINARS AVAILABLE on the Retake Our Democracy site

Postcard Posse
Meeting (via Zoom) at our regular time: 3 PM on Thursdays
for information, contact Diane at dshif@well.com)